The K-Factor!
Does Your Baby Really Need Vitamin K?

A lot has been read and said about your newborn’s need for Vitamin K - its controversy, importance, and intake, etc. Still, the big cloud of confusion prevails to float above the heads of all the new parents. So let’s cut it short, and come to the point.

What is so exceptional about this Forgotten Vitamin?

Vitamin K is termed as the “forgotten vitamin”. It is important because:

The K-Factor in Newborns:

During pregnancy, Vitamin K does not reach the placenta of the developing baby, which results in your baby containing extremely low amount of this vitamin at the time of birth. In older children and adults, the bacteria in the guts give us most of this vitamin, but newborns don’t have these bacteria in their guts. The result: Vitamin K deficiency.

Breastfed babies have a lower level of Vitamin K as breast milk does not have this miracle vitamin for few initial weeks in enough quantity. Formula milk, on the other hand, has added Vitamin K, though the quantity still may be quite less than the required amount. 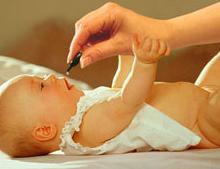 A low Vitamin K level can cause Vitamin K Deficiency Bleeding (VKDB) or Hemorrhagic Disease of the Newborn (HDN) - a condition in which the newborn has severe bleeding (most of the time this bleeding is internal) and causes brain damage and even death.

Though HDN is not very common, still one cannot put one’s baby at risk. For this reason,  newborn Vitamin K shots are given as a means of prevention.

Babies who are at a higher risk:

Your newborn baby may have an increased risk for HDN if he/ she qualifies for any of the following:

Having said that, there are no hard and fast rules, and one third of babies who suffer from Vitamin K deficiency do not exhibit any of the above mentioned points.

For giving Vitamin K newborns have the following risk:

It was earlier believed that Vitamin K injections were linked with Cancer and Leukemia. However, as per studies, there is no link between the two.

Since 1960, Vitamin K injections were given throughout Europe and US to newborn babies. It was a cheap and effective way with absolutely no proven side effects.

However, in early 1990’s, a couple of medical papers were established that questioned the reliability and safety of these injections, and their link to Blood Cancer (Leukemia). These papers examined children who suffered from Leukemia and checked how many of them had earlier received Vitamin K shots as compared to children who did not have Leukemia.

The findings were quite stunning. The probability of children who have had their Vitamin K shots at the time of birth and then later developing childhood Leukemia was higher than the no-vitamin-k-shot babies.

In UK, USA, Sweden and Germany these studies were specially repeated, but were not replicated. This means that it turned out that the earlier studies were a result of mere coincidence and nothing more. Even the studies conducted in Scotland and other parts of the world revealed that the usage of Vitamin k shots and cancer (be it any form, Leukemia or otherwise) has no association with each other.

Newborn Vitamin K injections are said to be more effective than drops. The injection is a one-time shot that is given right after birth. The oral dosage, however, takes a longer span of time.

What is your choice?

Whether you are in favor of giving Vitamin K for newborns or not is entirely your personal decision. Even if you have decided to give your newborn this “forgotten vitamin”, you can either go for the injection or the oral dose. Keep in mind that the success rate and efficiency of Vitamin K injections are far better than the oral dosages.

So...What will be your choice?

Return to Baby Care or Baby Health section.
Return from Vitamin K in Newborns to Homepage.