Helicopter Parents - Are you one?

Helicopter parents are found everywhere - hovering over their child like a helicopter all the time. They think giving 24/7 attention to their child/ children will result in a confident, secure, happy and bright child but it results in a total opposite. The child ends up becoming too dependent, insecure and emotionally fragile - with a constant worry that he/she will fail without their parents' help.

How do we become a Helicopter?

It is generally one among the two parents that's a helicopter. He/she thinks that he/she is protecting their child from the bad world, teaching them to be successful individuals. In reality, this parent is trying to correct and relive his/her own childhood. Whatever support (physically, financially or emotionally) was missing from their childhood, they want to give it to their child, such that they end up over-doing the whole thing, and being over-protective in so many levels.

Some helicopter parents, on the other hand, may be too good in studies or any extracurricular activities in their childhood and they now want their child to do the same and make them proud, ignoring the fact that the child may or may not have the aptitude or interest for it. This results in an exhausted child who starts to think of himself as a failure. 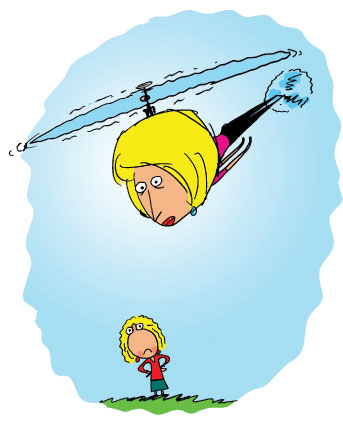 Helicopter Parents are born when the baby is!

Helicopter parenting is not something that the parents do all of a sudden. As soon as the baby is born, some parents become over-protected and end up hovering around their baby, ignoring the fact that every baby needs some space to explore and grow.

Every baby needs to be fed, loved and protected. Helicopter parents think their baby needs more of it!

How to avoid being a Helicopter?

There is a fine line between attachment parenting and being helicopter parents. You can support and connect with your baby in so many ways like kangaroo care, co-sleeping and/or doing DIY work together. So, if you are looking for the most successful parenting hacks, avoid being one of the helicopter parents. Giving your kid space will grow confidence in him/her. After all, who doesn't want a happy, independent and confident child?