Birthmarks: What Do They Really Mean

Birthmarks are simply a form of discoloration or pigmentation that can appear on your skin (face or any other part of your body) at the time of birth or a few weeks thereafter. They can be of several types as we will read and they are generally harmless.

They come in all shapes, colors, sizes, and appearances. They may disappear on their own or can be permanent too that grow larger with time. Some may also be associated with an underlying medical condition requiring a check from the doctor or removal by cosmetic means.

Whilst they are a common sight, not everyone is meant to get them. Keep reading to find the answers to questions such as what they are, how do we get them, how do they get treated, and many other related aspects.

Birthmarks are very common - estimated to be present in approximately 10% of babies in some shape or form, worldwide.

Some of the types are more frequently spotted than others, e.g. a stork mark that is kind of a vascular birthmark is common whilst port-wine stains are seen rarely. 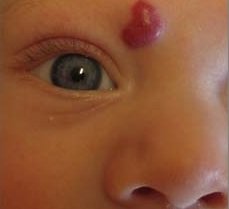 Types of vascular birthmarks include:

1. Hemangiomas – occur on the face or neck region, eventually, shrink with time and pink or red. They appear as a raised lump and increase in size, months after the birth of the child.

2. Stork marks (salmon patches) – are flat, may fade away with time, and range in color from pink to red. They usually appear on the face and nape of the neck. They are more visible when the baby starts crying or straining.

3. Port-wine stains – are permanent and usually occur on the face. The range from pink to purple and may become darker, larger, or lumpier with the growth of the child. 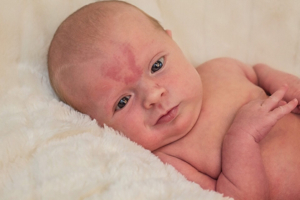 Pigmented birthmark types are as follows:

Birthmarks need to be differentiated from moles. Whereas birthmarks are skin spots becoming apparent at birth or shortly thereafter, moles or other marks can appear later on in a person’s life.

Why Do We Get Birthmarks?

Why do we get them is a million-dollar question to which no one has the answer to, up until now. We do, however, have a general comprehension regarding the causes of the above two types of birthmarks.

Vascular birthmarks are formed because the blood vessels underneath skin haven’t developed properly. It is for this reason they have a pink or red coloration.

Pigmented birthmarks are caused as a result of an increase in the darker pigmentation (melanin) of skin, or clumping of melanin-producing cells called melanocytes.

Certain birthmarks are hereditary and run in families, while others aren’t.

In very rare cases, some can also be linked to gene mutations. By way of example, certain babies that are born with port-wine stains will have a rare condition known as Klippel-Trenaunay syndrome - a genetic mutation that is not necessarily inherited.

Another example of a rare condition is Sturge-Weber syndrome that occurs as port-wine birthmarks and is a result of a different gene mutation. This syndrome doesn’t run in families and you do not inherit it either.

What If You Don’t Have Any Birthmarks?

If you don’t have it, then it doesn’t mean anything and has no relevance as such to any particular health condition or concern. Birthmarks are common, but not everyone gets them. There is no process or procedure by which you can ascertain whether a child will have it or not.

Many types of birthmarks will fade as they grow older – so you can have a birthmark when you were born or a few weeks after it, but it may vanish completely after a few years.

Some birthmarks may be blatantly obvious – like your face, arms, or neck. This may make you cautious or may even have an impact on the functioning of your body parts, such as mouth or eyes, in case of hemangioma.

If you do not want to live with it, then you can reduce them or remove them with the help of medications, laser therapy, or surgery.

Hemangiomas can be prevented or their growth can be slowed down with the help of some topical medications. This is only recommended when hemangiomas are large, disruptive concerning another part of the body, or growing fast.

Corticosteroids (anti-inflammatory medications) are taken orally or injected directly into birthmarks to work effectively on blood vessels and help them shrink in size.

Beta-blockers (oral medications) are generally prescribed to treat high blood pressure. Propranolol is a kind of beta-blocker that can reduce the size and/or aesthetics of hemangiomas. It shrinks the blood vessels and reduces blood flow. This, in turn, will lead to the softening, fading, and shrinking of the birthmark. Another beta-blocker commonly used in similar situations is Timolol that has topical applications.

Laser therapy can be resorted to in cases of port-wine stains, as it can lighten or reduce the size of birthmarks.

Surgery – is recommended by the doctors when you want to get the birthmarks removed, particularly those that are raised and apparent on the visible part of the body or causing discomfort. For example, in the case of congenital moles, these may be cancerous and large. Surgical removal has its side effects and that includes scarring.

Why do people have birthmarks?

We still do not have an established scientific answer to this question - it remains a mystery!

Is everybody born with a birthmark?

Birthmarks are common but not every baby will have them at birth. They also do not necessarily run in the family.

Can birthmarks be cancerous?

They are generally harmless. However, in certain rare instances, they may become cancerous. For instance, babies born with a congenital mole are at a higher risk of developing melanoma skin cancer, when they grow older.

Do birthmarks go away?

They're usually harmless and may disappear or shrink in size, on their own. Other forms may be permanent and require removal through medication, cosmetic, or surgical means.

They are generally innocuous and disappear on their own. Some of them, however, may turn into cancer when the kid grows older. Always get them checked by the baby’s pediatrician, who can assess it (i.e. whether it is a genetic one requiring treatment), and also monitor its growth, if there is any.

You (and your child when he grows up) can self-monitor it as well by looking at any changes in it, for example, size, growth, elevation, irregular borders, or darkening pigmentation. Any increased growth in a birthmark needs to be reported to the doctor immediately.

Are birthmarks from your past life?

There are all kinds of myths associated with the connection between birthmarks and past-lives. Certain people believe that birthmarks tell a story about how you died in an earlier life. Moreover, some also believe that the shape of the birthmark can give you a clue to your occupation in a past life, i.e., a sword or dagger can be interpreted as a soldier or a warrior.

Do birthmarks have meanings?

Dermatologists do not know the rationale behind the appearances of birthmarks. But certain spiritualists firmly believe that they have a special meaning, depending on the location of the birthmark on the body. Some of them with their corresponding meaning are:

Return from Birthmarks to Homepage.
Check out the Baby Health section.